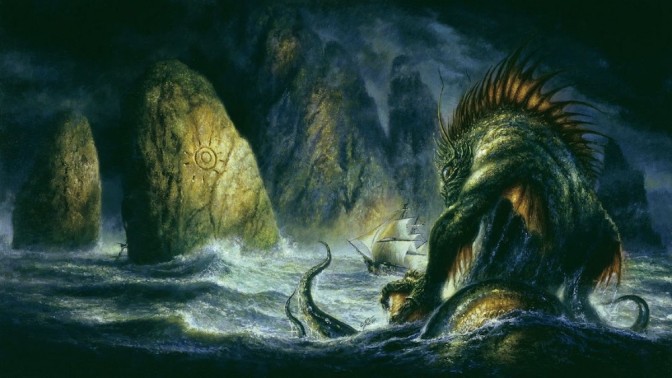 What does it really mean to be Lovecraftian? This week I’m delighted to host a guest post by historian-turned-novelist Kathryn Troy, who has just released her dark romantic fantasy novel A Vision in Crimson. Her historical expertise in the supernatural and the Gothic informs her fiction at every turn, and she’s stopping by on her blog tour to take a look at the influence of Lovecraft on speculative fiction:

Howard Phillips Lovecraft is one of the most influential authors in American literature. His craft, his universe, his subject matter and underlying themes are so pervasive in speculative fiction—fantasy, sci-fi, horror, and everything in between—that his impact is seen and heard the world over, even when it isn’t recognized as such.

You’ll be hard-pressed to find a speculative fiction author today who doesn’t know who Lovecraft is, or doesn’t attribute him with having at least a modicum of influence over their own writing. But what does it really mean to be Lovecraftian?

There are as many ways to incorporate Lovecraft into fiction as there are interpretations to his own works and that of his inner circle, who collectively created “the Lovecraft mythos.” How you define his fiction depends on which of his weird tales speaks to you, which of the million facets of his writing struck home. For literary scholars like S.T. Joshi, Lovecraft’s biggest contribution was his incorporation of cutting-edge science into his tales. Pulling on the most contemporary stories—the discovery of King Tut’s tomb and the planet Pluto, circulating theories of Atlantis, and sensational accounts radium poisoning, Lovecraft turned the real and the possible into unspeakable horror.

I think of him as more of a pillar in the establishment of the American Gothic, begun by Hawthorne and Poe, continued by Lovecraft (a huge fan of Poe when he was just becoming popular), and brought forward by Stephen King, the definitive face of American horror who has repeatedly talked about the influence of Lovecraft in his prodigious repertoire. The tradition of Gothicism in America plays on several strains in our society: our own haunted history, a maze of obscured pasts; the conflict between science and superstition; between science and mad science; and a maddening desire to know what is or should be unknowable.

I see the antiquarian in Lovecraft: the obsession with ancient secrets and forgotten powers, the driving force behind another of my literary favorites, M.R. James. That strain of literature can be connected very easily to the world-building of fantasy fiction, and I am personally drawn to reading and writing worlds built upon secrets, upon pasts that tease at the present, and are populated with characters that would know those secrets, despite the terrible costs that such knowledge might bring.

The influence of Lovecraft on A Vision in Crimson, the first title in my new fantasy series, is strong in my mind, but subtle on the readers, because of how deeply embedded it is in the world itself. Both of my protagonists are born out of pasts they don’t fully understand, and have been actively prevented from understanding. Such deeply personal mysteries become all the more urgent when supernatural and magical abilities are thrown into the mix. How can you control what you don’t understand? That’s one of the main plot threads for my protagonist Kate throughout the series, and comes back to bite Luca even after he decides it is not worth the cost of knowing. The visible Lovecraft grows towards the end of the first book and throughout the remainder of the Frostbite series, as it largely defines my concept of the monstrous, and was influential in how I described the many palpable dangers that my characters face. Those initiated in the mythos will find word choices and characteristics that echo Lovecraft’s cosmic horrors, but you won’t see any Cthulhus running around Icarya. (Maybe a shoggoth, but I digress).

My current project, Bog Body, showcases Lovecraft on a more transparent level. Asenath Hayes, a young archaeologist, dives deep into Druidic rituals to grasp how her research could possibly come back to life after two-thousand years spent in a watery grave. As she gets pulled deeper and deeper into the mysteries of the bog, she comes to rely on the protection of the only gods she knows—the gods of Egypt. I was looking to set a brooding, ominous mood throughout the book, even with its romantic sub-plot. In my head, it was always set in Arkham, the faux Providence commonly used to lend a story a Lovecraftian feel. I debated whether or not to go this route, but I didn’t want to set it in my own hometown of New York, and calling a place like Arkham by another name seemed unnecessary. In the end I went all-in, and I’m happy with the results thus far. It allowed me to insert little idiosyncrasies that only make sense in a town that has seen its share of the weird and unexplained.

If you’ve never read a Lovecraft story in your life, go do it. Now. Start with “The Call of Cthulhu,” or my personal favorite, “Shadow Over Innsmouth,” and count yourself among Lovecraft’s most loyal. Ia! Ia!

“Katelyn knows her magic is risky, but Icaryan light is fading fast and she is desperate. Returning to Earth, she crosses paths with Luca, a vampire hybrid living on the outskirts of humanity.

Passion sparks their weary hearts. The rogue hunter follows Katelyn into a world teeming with wonder and danger, forsaking his own quest to root out his father.

But his father has not forgotten him.”

A Vision in Crimson is the first installment of a new epic fantasy blistering with romance and Gothicism.

Add it on Goodreads

20 thoughts on “The Dark Corners of Fiction: Lovecraft’s Effect”