I’m not averse to a few fantasy clichés on a book cover – they let me know at a glance that I’m looking at a fantasy fiction novel, and can be nice if used in creative or appealing ways. As with all clichés, however, they become eye-roll-worthy when used en masse, i.e. when several standard tropes are all packed into the one artwork. If a book tries to cover too many bases, it can start to look a little silly.

I’ve encountered a few covers that take it a bit far, but I thought it’d be amusing to go even further, and have a bit of fun with the tropes of my favourite genre… so here is my recipe for a no-holds-barred, all-boxes-ticked, epic high fantasy book cover (accompanied by examples from the most clichéd design I can muster). I’m no graphic designer, but I imagine that will add a nice level of unprofessional shine to my examples.

It’s a good idea to start your cover with a moody fantasy setting. This can be any of the following:

If you want to go full-fantasy cliché, try to include as many of the above as possible, just to be sure you cover all your bases.

Now you’ve got the landscape, you need a heroic figure… and since this is fantasy, they should be wearing a robe, preferably with a cowl or hood.

A cloak or ornate armour will also suffice, as will impressive ninja-style attire… but be careful to obscure or shadow facial features. After all, who wants to have their imaginings of how the character looks spoiled by a too-visible face? 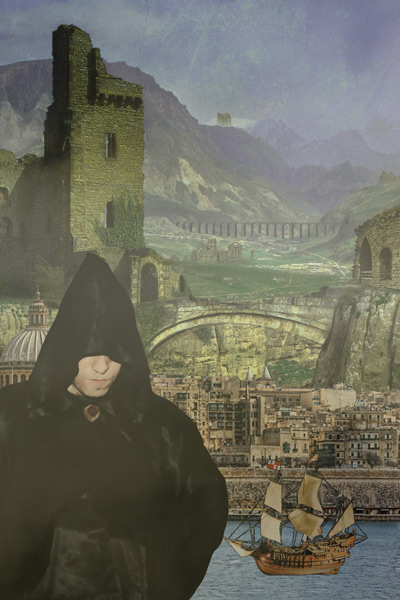 It’s a rare fantasy cover that doesn’t sport a medieval weapon of some kind – bows, arrows, daggers, axes and wooden staffs are all acceptable.

I’m going to stick with the classic choice: an impressive sword. If going the sword or dagger route, a richly decorated hilt is a must.

Your epic fantasy cover wouldn’t be complete without a dragon – whether the beast is shown in detail, in silhouette, or just alluded to with some scales.

I put my dragon in the background near the tower, since that seems a good spot for a dragon… and also I’m running out of space in the foreground. 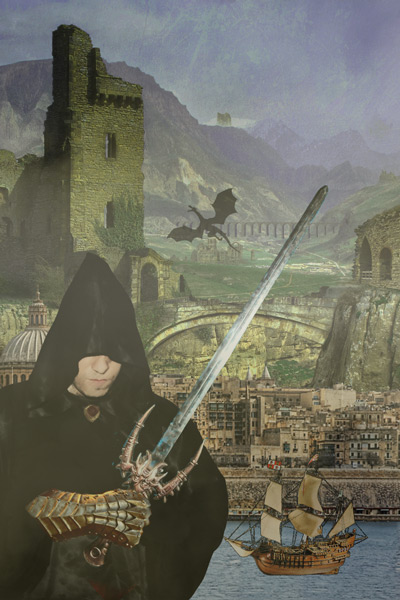 Since the Elvish scratchings on Lord of the Rings illustrations, mysterious symbols and letters have always added that extra air of mystery to a cover.

Be sure to include them, or better yet, to incorporate an amulet or piece of jewellery that has a symbolic shape or engraving, thus adding two cover tropes in one fell swoop.

This is my favourite ingredient: glowy magic. It adds a nice visual effect, particularly if used with subtlety… but this is a cliché recipe so subtlety isn’t the point. Whether you choose sparkles, swirling fire magic, smoky wisps or rays of light, lay it on thick.

Since I gave my figure a sword, I’ll make it a glowing, magical, vanquishes-all-evil one. 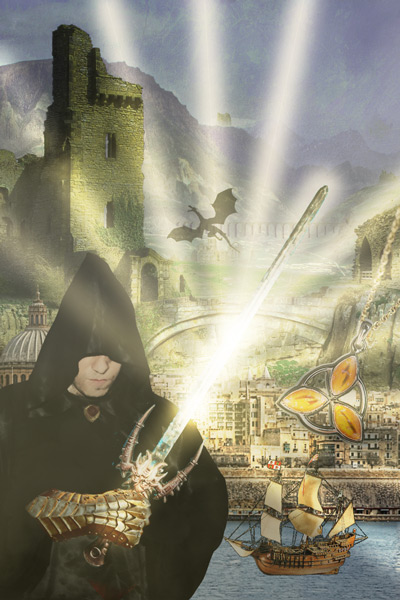 Corvids such as ravens, blackbirds and crows abound in fantasy images and stories, carrying a nice dose of symbolic and mythical baggage with them, so I recommend adding at least one corvid to your cover.

I’m going to tie mine in with the next ingredient – the border.

Just as every cake needs icing, a fantasy cover needs a good border. The kind of border depends on the kind of fantasy, but generally anything with curls, vines or vaguely Celtic patterns will work. 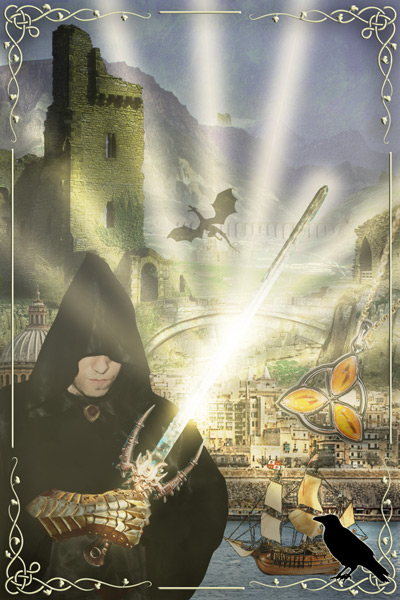 Then comes a very important ingredient: the title. I have a more detailed post about fantasy title trends, but here’s a summary of a few common ones that I’ll be trying to work into my title:

Here’s the one I’m going with:

The Last Assassin of the Unseen Throne

A clichéd fantasy cover has to indicate it will be part of an epic series with an equally epic title. But don’t use a word as banal as ‘series’!

‘Chronicle’, ‘Chronicles’, ‘Saga’, ‘Cycle’ and ‘Realm’ are all acceptable alternatives. Better yet, make up an entirely different word to replace the word ‘series’.

I’m going to apply more of the title trends I listed at number 9 to create my series title: 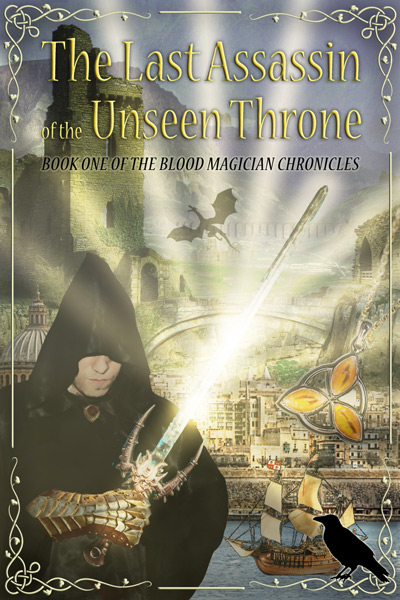 Not all fantasy covers have a tagline, but many do, and leaving one out would be a waste of a good opportunity to add another cliché. Be sure your tagline could apply to just about any high fantasy ever written.

I’ve drawn inspiration from some taglines I looked at last year to produce one that’s appropriately generic:

“A broken world. A great evil. Only the chosen can save them all.”

The finishing touch is the author name. You aren’t a real fantasy author until you’ve reduced your name to multiple initials – think J.R.R. Tolkien, George R. R. Martin or J. K. Rowling. If you don’t have enough of them, just add some, and if your last name doesn’t sound fantasy-author-ish, create a pseudonym.

I’m going to go with N.R.R. Alkin, since double Rs seem to be all the rage and it couldn’t hurt for my last name to be more Tolkien-esque.

And voilà! If you’ve followed this recipe faithfully you should have one clichéd epic high fantasy cover. Here’s mine: 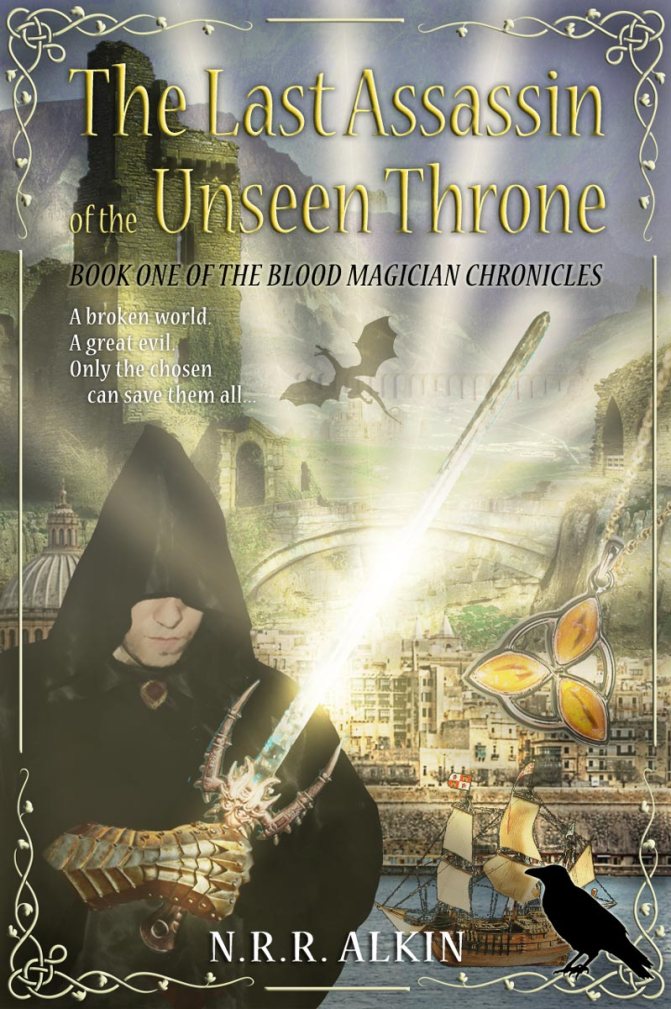 “The Last Assassin of the Unseen Throne”

Admittedly it’s not the most appealing book cover I’ve ever seen… but no one could mistake it for anything other than a fantasy!

Some other cover-related Thoughts on Fantasy posts:

What do you think of multiple clichés on covers? Did I miss any vital ingredients? Feel free to mention them in the comments.

79 thoughts on “How to Make a Clichéd High Fantasy Cover”