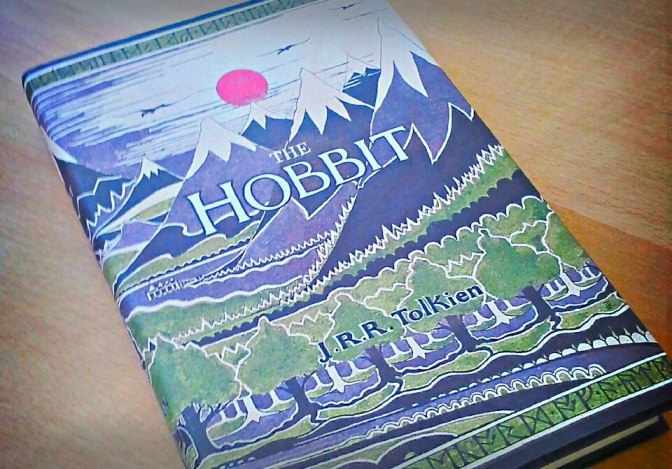 Cover of The Hobbit (based on 1937 first edition dust jacket). Photo by breki74 (CC BY-SA)

The 30s and 40s were a crucial period for the fantasy genre. Not only did they see the publication of The Hobbit and the meeting of the Inklings group of fantasy writers, but also a rise in the number of pulp magazines publishing fantasy stories. While the genre had not yet become mainstream, the stories of these decades significantly contributed to its development and definition.

Below I’ve listed what I believe to be the 12 most significant fantasy works published between 1930 and the end of 1949, with their original covers where possible. Because some serialised stories didn’t appear in novel form till later decades, I’ve instead included the covers of magazine issues they featured in (if possible): 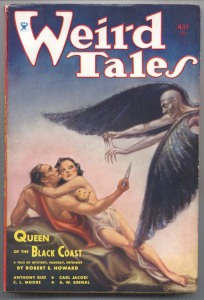 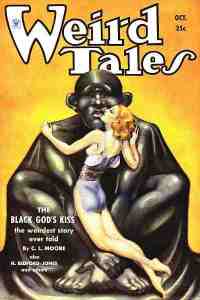 The Virgin and the Swine (The Island of the Mighty), (Mabinogion Tetralogy), Evangeline Walton, 1936

The Well of the Unicorn, Fletcher Pratt (George U. Fletcher), 1948

The Inklings  group met in Oxford in the 30s and 40s. Its members, which included C.S. Lewis and J.R.R Tolkien, not only wrote fantasy, but also some of the earliest scholarly writing on fantasy (e.g. Tolkien’s 1939 essay “On Fairy-Stories”) often pointing out that it could appeal to adults as well as children. While The Hobbit didn’t achieve the soaring levels of popularity The Lord of the Rings would later garner, it was none-the-less very popular after its publication in 1937, and set the stage for his later work.

This period was also important for comic fantasy and sword and sorcery / heroic fantasy. T. H. White’s The Once and Future King affectionately mocked elements of the King Arthur legend, and included anachronistic humour and social commentary. The magazine Unknown Worlds (founded in 1939) featured sword and sorcery tales with a comedic element, publishing the stories of writers like L. Sprague de Camp, Fletcher Pratt and Fritz Leiber.

Comics and superhero fiction also had their beginnings in this era, with Jerry Siegel and Joe Shuster’s Superman (1938) heralding the golden age of comic books from the 30s-50s. While these comics were not fantasy or novels, they had a significant influence on speculative fiction as a whole.

The end of this era was marked by the founding of The Magazine of Fantasy and Science Fiction (in 1949). Its prominent use of the word “fantasy” no doubt helped firmly establish the term for the genre (though it had been used earlier by other publishers, e.g. The Fantasy Press Publishing House founded in 1946).

Other 30s and 40s Works and Authors

There are some works that didn’t make it onto the list above that are none-the-less worth mentioning too:

NOTE: I’m no longer mentioning science fiction works here unless they are particularly relevant to fantasy, because the two genres begin to diverge more obviously in this period, and with the proliferation of sci-fi in this era (the 30s and 40s are sometimes referred to as the golden age of science fiction) it would make my list too long!

Are any of these books a favourite? Or would you add another important novel to the list? Feel free to give it a mention in the comments.